(PRLEAP.COM Oct. 25, 2018) LaPuerta Books and Media announces the publication of the fourth edition of the disruptive business textbook How to Lie with Charts by Gerald Everett Jones. Previous editions of the book have been adopted as college-level courseware in curriculums such as data visualization, mathematics, graphic design, and political science. The book has been suggested reading at institutions such as Arizona State, Stanford, Harvard, Brown, San Jose State, Leicester University, and Georgetown Public Policy Institute. This fourth edition includes new chapters on fake news and deliberate disinformation in social media, along with Big Data abuses and misinterpretation of metadata.

Read more about the new book release on PRLeap: 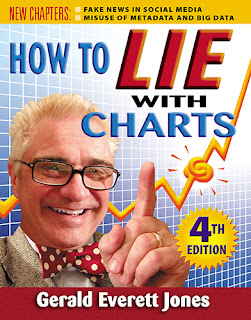 Posted by daboychik at 4:56 AM No comments: