So Obvious It's Not

One of the fundamental themes of How to Lie with Charts is that our interpretation of visual information is grounded in deep-seated notions about spatial orientation. These notions are cultural biases, even though widely held, and are not innate.

For example, we see motion from left to right as the progression of time. And motion up and down is gain or loss. Thank you, Rene Descartes for the Cartesian coordinate system that grew from these biases. The up-down is a glass-half-empty or half-full notion, and the left-right is probably rooted in the Western convention of reading from left to right on the page.

Likewise, the legacy of Johannes Mercator and his grid-plotted maps has been to link the notions of North-South to up-down and West-East to left-right, even though these choices are purely arbitrary.

Our brains make meanings automatically and involuntarily based on these assumptions. As just one example, a chart (or picture) can imply progress where there may be none simply by emphasizing rightward motion. And we can explain or rationalize such misperceptions, but the initial impression persists at some level.
Posted by daboychik at 9:46 AM No comments:

Jared Matthew Kessler, author of The Poet and the Billionaire, just posted this five-star review of How to Lie with Charts on Amazon http://bit.ly/I2VXr.

Posted by daboychik at 10:31 AM No comments:

I'm starting to gather information for an Investors' Edition of How to Lie with Charts. Looks like I have a lot to learn about technical analysis (finding patterns in charts to make hypotheses about market behavior).

I wonder:
My scientific wildass guess (SWAG) on this would be that technical analysis would miss the underlying factors that caused weakness.
Posted by daboychik at 11:50 AM 2 comments:

In Which I Make a Dumb Mistake

There was a howler of an error in the first edition of How to Lie with Charts (published by Sybex and then reprinted by iUniverse). The error had to do with the defintion of mean, which simply "means" average. However, because the term average is sometimes used loosely to refer to other methods of data reduction, mean is the preferred term in mathematics and statistics.

Quite recently, I found a helpful article on the topic here:

I took pains to clarify and carefully explain the meaning of mean in the Second Edition (LaPuerta).

Posted by daboychik at 8:43 AM No comments: 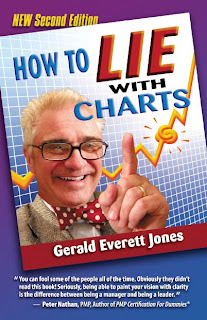 If you found your way here, you probably know that my book How to Lie with Charts is now in its Second Edition and has been adopted for coursework at institutions such as Empire State and Georgetown Public Policy Institute.
(Available from Amazon.com, Baker & Taylor, Booksurge, and other booksellers.)

In June of 2009 (next month as I write this) I will be giving the keynote presentation on this topic to an Operational Excellence conference in San Francisco. We're going to have great fun while I gently help these managers learn to mistrust everything they see in business slides, including their own.

And -- just the cure for post-meltdown bewilderment -- I'm preparing a new edition for release this fall: How to Lie with Charts: Investors' Edition.

There will be more about this edition -- which is aimed specifically at financial analysts and business managers -- on these pages in the days to come. So please consider adding this blog to your regular feeds so you can get all the updates -- and puh-lese post your questions, quibbles, and quantitative musings to the discussion threads.

Feel free to comment on any post to pose a query about the book or about the fascinating topic of visualizing numeric results. And if there's something you want to see in the new edition, there's still time to suggest it.
Posted by daboychik at 9:57 AM No comments: