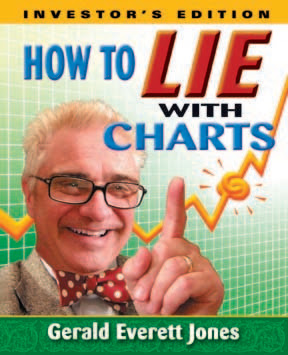 How to Lie with Charts: Investor's Edition by Gerald Everett Jones (LaPuerta Books and Media)

June 29, 2015   Entertainment News
(PRLEAP.COM) June 29, 2015 - New material in this updated third edition of How to Lie with Charts includes financial proofreading, inherent flaws of dashboard displays, and basics of stock market technical analysis. The book's emphasis is on catching chart errors and ambiguities - which are often unintentional - whether you are making your own or trying to interpret a presenter's claims.

The author maintains that if you are using a computer to generate charts, you don't have to be taught how to lie – you're probably already doing it unintentionally. He counters this tendency by explaining the principles of persuasive and undistorted visual communication. The goal is careful thinking and clear expression.

Besides being a popular title in the general business trade category, prior editions of How to Lie with Charts have also been adopted as college-level courseware in business math, statistics, and management. The book has been a supplementary text at institutions such as SUNY Empire State College and Georgetown Public Policy Institute.

The book's longevity is testimony to its continuing value and usefulness. It has sold steadily since the first edition appeared in 1995. Data analyst Robin Wolfson, CEO of Datastep Development praised it saying, "It broke our hearts to see this book come out, because it was the one we were planning to write. Having read it, however, we doubt we could have done a better job. Jones addresses fundamental issues of visual perception in a style that is clear, concise, and amusing."

Dave S., who manages a brokerage in suburban Chicago, says of the new edition, "It's worth the price of the book for the new material on technical analysis alone. It's an excellent survey of the basics, in an engaging, nontechnical presentation." Anthony Hitt, CEO of Engels & Völkers North America said, "Who would have expected a book on charts and graphs to be so entertaining? It's an exceptionally fun read (really) and a must-own reference for anyone who presents or analyzes data."

How to Lie with Charts: Investor's Edition is available in trade paperback and Kindle from booksellers such as Amazon, Barnes & Noble, and Baker & Taylor. As well, supplementary DVD seminars led by the author can be purchased from Amazon Video: How to Lie with Charts (one-hour seminar), Technical Analysis Basics (one hour), and Financial Proofreading (half hour).

Author Gerald Everett Jones has managed major proposal and business analysis projects in government, healthcare, and commercial sectors. He is the author of more than 25 business and technical books on digital media production, including numerous how-to books on legacy charting applications such as Harvard Graphics and Freelance Graphics. He has also written extensively on PowerPoint and Excel. He has hands-on background in IT systems development and was project leader on the ARTIS computer graphics system, a precursor of PowerPoint.

When Jones is not developing business and technical material, he writes fiction. He's the author of The Misadventures of Rollo Hemphill series of humorous novels, Mr. Ballpoint based on the Pen Wars of 1945, the adult melodrama Christmas Karma, and the forthcoming Bonfire of the Vanderbilts about an art scandal in 1890s Paris.